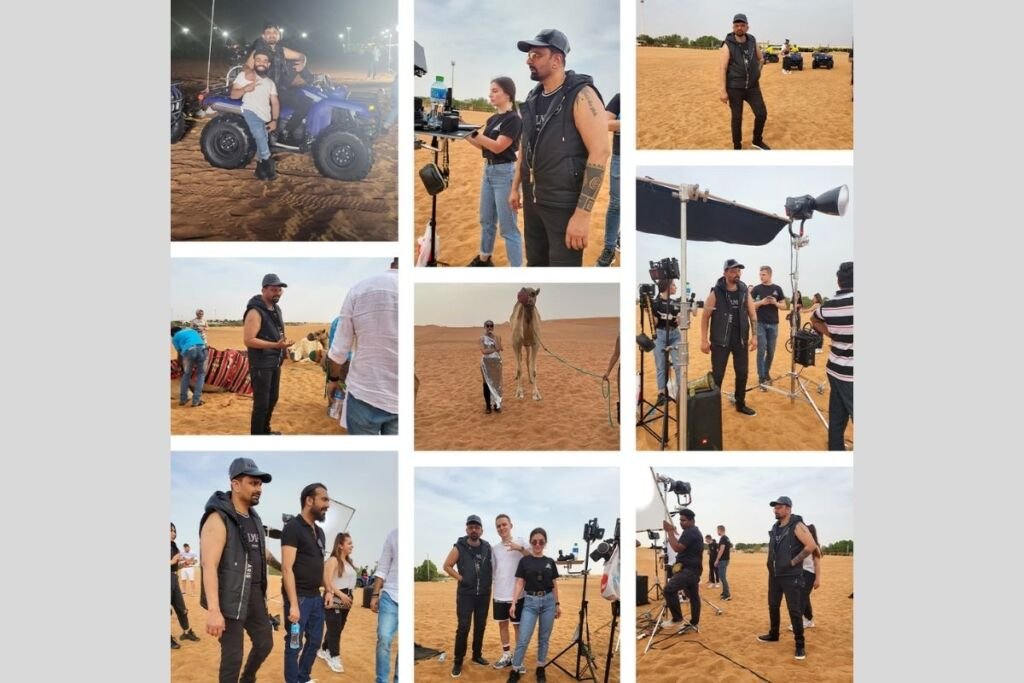 March 8: Since the time Gaurang Doshi has announced his upcoming project, a brand new webseries titled 7th Sense, we have been on our toes to get any miniscule detail about the show. Doshi’s production team has been very tight lipped as to divulge any information. But, we are very ecstatic to be the first ones to report to our readers here that production of 7th sense has in fact begun with a supernova bang!

We put our inquisitive source to go to the depth of this story. Upon going on shoot location, which is again one of the most amazing destination in Dubai i.e Monster Experience Desert, our source was held back by the tight security that had enclosed the shooting location as it had an astounding number of crew members from Hollywood & Bollywood. But our source who made contact with the important crew of the project reported back about the eventful situation on ground about Gaurang Doshi & Rocky Khan’s new venture. The lavishness of the production is true to the brand name Doshi. Shooting with an entirely foreign crew, there was a horde of monster buggies, immaculately dressed camels, and extravagant costumes along with some of the best exotic dancers at the Monster Experience Desert. Is Doshi trying to whip up a storm in the desert? By the looks of it surely looks like that!

According to sources close to the producer, the shooting for the promotional video of the webseries has already begun and it is heard to be the biggest collaboration of Hollywood and Bollywood have ever witness. What we can fathom from all the information we got is that the production value of 7th Sense is going through the roof and it is being feted as the most expensive title track for a webseries or bollywood ever.  We were also told that Doshi & Khan are leaving no stone unturned to make the series a magnum opus and have managed to bring together some of the biggest names and megastars from Hollywood & Bollywood together. And to put the cherry on top of the cake we bring to you THE FIRST &THE EXCLUSIVE! Photos from the shoot location of 7th Sense. We hope it brings some relief to your curiosity for the time being.

Yes, you read that right! And it just makes us stop and wonder, what is it that Garang Doshi is trying to hide? Why is there a discrete silence from him? Because this is definitely not his style as the audiences are accustomed to his larger than life persona and panache of doing everything with his characteristic grandiosity and flair. Everything he has done so far be it shooting a film or promotions, involves an ostentatious display of his creativity & passion for the project. But this time around the silence is deafening for many. It has definitely made everyone curious and with good reason.

Rumours had been swirling around the casting of the webseries and the project being shelved. But Doshi had recently cleared the air about the latest controversies surrounding 7th sense and has come clean and straight about it all. Clarifying that the delay was due to the surge of Covid-19 he made it very clear that it is not in his nature to abandon a project. Talking about the cast, he had recently announced that he has managed to pull off a magnificent & marvellous feat by assembling some of the biggest names from Hollywood & Bollywood together.

With everything that has been going on it looks like Gaurang Doshi is all set for another smashing hit. Our only sense of bewilderment comes from the fact that why has Doshi remained silent all this while? What is the BIG SECRET that he is keeping so close to his heart? Why is he holding all his cards so close to his chest? What is his next big move? These are important questions that only Gaurang Doshi can himself answer. And we hope to get some responses very soon. Until then, we hope to find a cure for our curiosity and wait patiently!