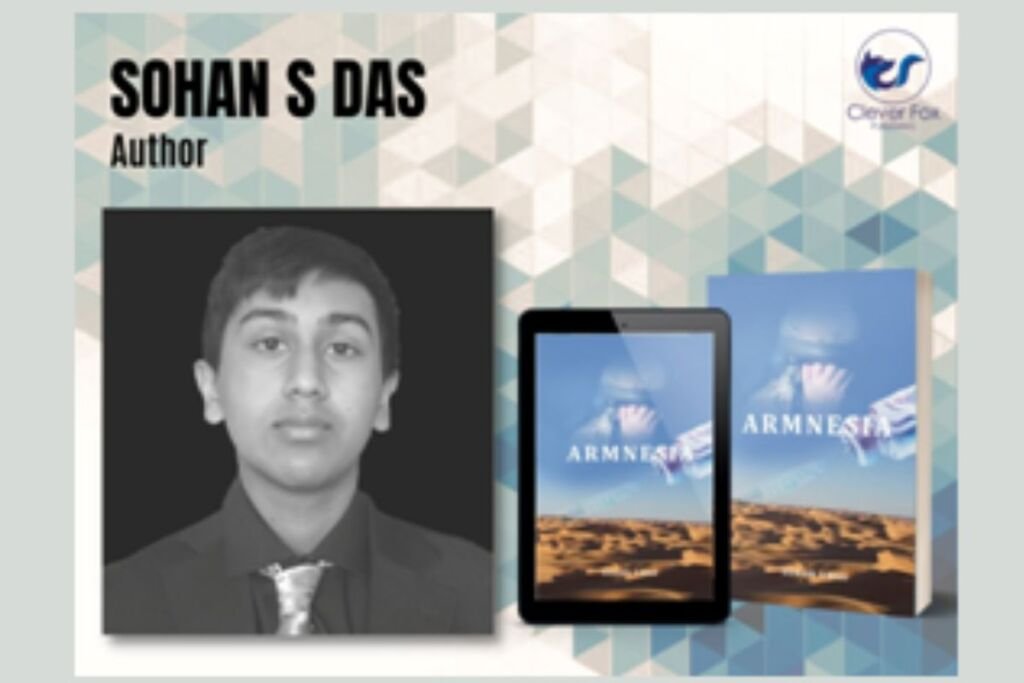 June 12: We have always heard stories of soldiers full of bravery and ready to sacrifice life for their own country. But this story ‘Armnesia’ penned down by Sohan S Das is a story about exploring the tribulations of an amnesiac soldier who is the failed subject of biological warfare mixed with traitorous intent from a high-ranking scientist. It is the author’s first fiction work; he wrote this quick-read thriller for teens, tweens, and anyone who enjoyed reading as a teenager.

The book, published by Clever Fox Publishing, depicts the story of the lead protagonist Anthony Allen. He finds himself tied to a chair in the back of the plane, with no memory of who he is, where he is, and what he was doing. On his journey to regain his memory, he faces many obstacles, none of which he is prepared to deal with, leaving him scraping out of trouble until he can finally find respite.

Talking about the novel, author Sohan S Das stated, “Since this is my first attempt at writing fiction, I feel happy to write a story about a brave soldier. While I was writing, I tried to make sure that I wrote purposefully, and that people would understand what I was trying to portray. As a writer, if the readers connect to your book, then it is the most valuable thing, and then you know that all your hard work was worth the pain of writing and re-writing. Once people read the book, I like their feedback as it helps me grow as a writer and know exactly where and how to move forward as a writer.”

“I hope that people will enjoy my book and share their thoughts. In the future, I envision writing more, for both my own enjoyment and for others’ enjoyment. I want to explore writing in different styles and genres to further my skills as a writer” he further added.

Armnesia, penned by Sohan S Das, is already gaining popularity among the public and is accessible on Amazon and the Clever Fox website. The writer is a young author who has always had a creative flair. His love of writing began at the age of seven when he wrote a letter from the perspective of a WWII evacuee, which was chosen for publication in his school magazine. He showed empathy and thought above his years. Since then, he has written poetry for Young Writers UK and has published scientific papers in periodicals. At the centenary of WW1, his poem “Trenches” won the St Albans Legacy Project Award. In addition to writing, Sohan is also passionate about music and plays regularly.

If you love to read fiction thriller novels, then Armnesia by Sohan S Das is the right choice. So, get access to his book from various online platforms and start reading to go on a thrilling journey.