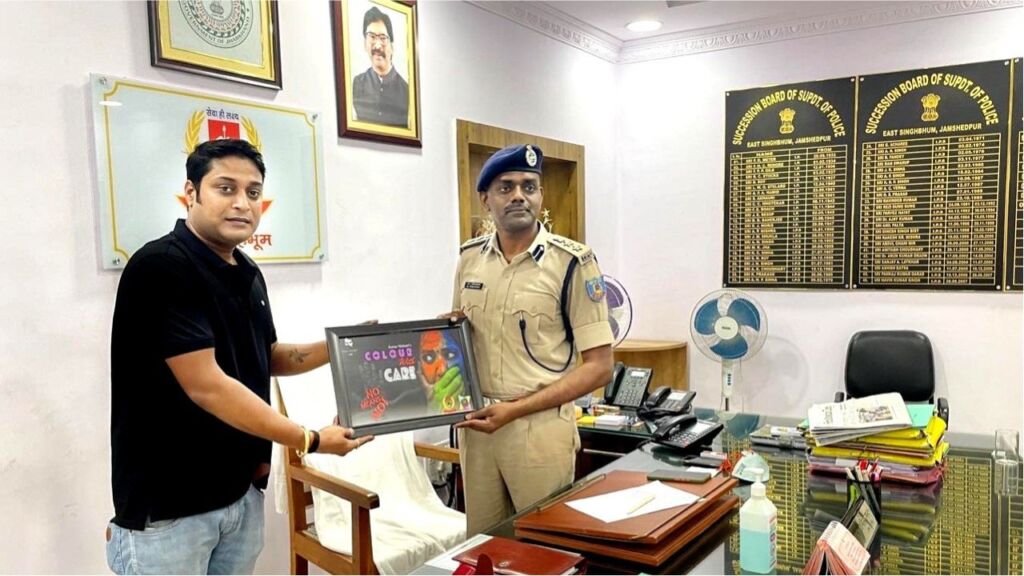 India, March 24: This Holi 2022, the fabulously skilled singer Kumar Nishant decided to spread the colours of awareness through his new song ‘Colour With Care’. The song has been written, composed and sung by the artist himself. The song was launched by Dr. M Tamilvanan, IPS. Senior Superintendent Of Police, East Singhbhum. The administration appreciated his effort in making such a beautiful song with the message of awareness.

This is an excellent initiative by the artist Kumar Nishant in collaboration with the Jharkhand Police. The music is available on Youtube and audio platforms like Spotify, Wynk, jio saavn, gaana, Amazon music, resso and other music streaming apps. The music video is impactful, especially due to small messages shared by the Jharkhand police force. The importance of dialing 100 immediately when things don’t feel right is stressed and is urged to be used by the women through the medium of the song Colour With Care.

The singer-songwriter is a great zealot of the thought, ‘Power Of Music’ and hence says,” In this era where nobody is a fan of lengthy speeches, music is the most relevant and robust mode of expression and communication.”

When asked the reason for creating this song, the singer said,” The sole purpose of making this music video was to convey the importance of women’s safety, especially during the festivals like Holi where the crowd becomes an advantage for some ill-mannered people.” Writer, composer and singer Kumar Nishant is known for penning down some great pieces of music with deep, relatable meaning to them. He started his journey by initially writing poems. His first poetry book based on love, separation and relationship named “Tere Bina” was launched in 2017.

Available on Flipkart, Amazon, Google, rekhta and all leading book stores of India. People’s love and appreciation fueled his journey and encouraged him to write more and present it to the people using social media. After relentless hard work, White Hill music approached him for writing lyrics; there, he wrote and composed two beautiful songs named “Tere Bina & Tu Hi Sach” Both the songs became hits and were loved by music lovers of all genres.

The word artist fits Mr. Kumar Nishant, instead of a singer or a writer in particular, as he is a rounder when it comes to anything regarding music. He’s always said and believed in the mantra of ‘consistency is the key to the pinnacle of success.’ As a result, there is always some great content lined up from his side to entertain and educate the viewers and listeners. The artist gave some insights about his upcoming release, including Bollywood songs, his new book and some fabulous singles. Hence, knowing how people have changed their method of expression to music now, the artist said that he had made this music piece colour with care, with a lot of responsibility.

Stream the Music Video on Youtube: Colour With Care