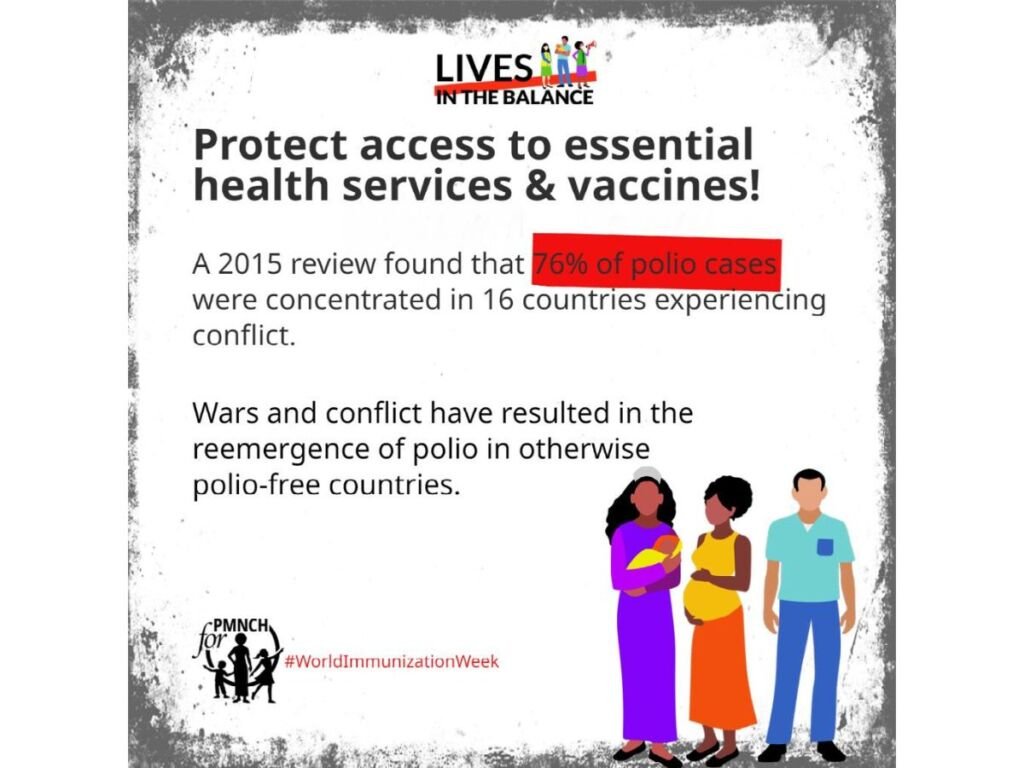 New Delhi (India), April 27: Women, children and adolescents, and the health and aid workers who provide their care and support, are facing growing challenges and life-threatening risks in these times of escalating conflict and humanitarian crises worldwide, according to a commentary published in the British Medical Journal (BMJ) this week to coincide with World Immunisation Week (24-30 April, 2022).

While the recent devastating hostilities in Ukraine have captured the interest of the world, there are a number of other long-standing and growing conflicts that also deserve attention and political mobilization from the global community. In 2020, for example, a record 56 active conflicts were documented globally, including Myanmar, Pakistan, Afghanistan, Syria and Iraq.

Commentary co-authors, the Rt. Hon. Helen Clark, PMNCH Board Chair and Former Prime Minister of New Zealand and Kersti Kaljulaid, UN Secretary General’s Global Advocate for Every Woman Every Child, Former President of Estonia, call for a multi-sectoral response to ensure continuity of services for women, children and adolescents in conflict and humanitarian settings. They also urge global leaders to commit to greater investment in safety and protection measures for health and aid workers who risk their own lives striving to provide services, support and care to vulnerable women, children and adolescents in the most challenging circumstances.

In periods of conflict and in challenging humanitarian settings, even the most basic health entitlements – from accessing safe midwifery services to routine childhood vaccinations – can be denied to vulnerable women, children and adolescents who need them.

The theme of World Immunisation Week 2022, Long Life for All – in pursuit of a long life well lived, provides a timely reminder that while delivering life-preserving vaccines against dangerous childhood diseases remains a global ambition, it has not yet been universally achieved, particularly for those caught up in conflict. If an armed conflict occurs within 10 km from where a child resides, the odds that a child receives any vaccination are 47.2% lower. Following the killing of eight polio workers in February 2022, for example, the national polio vaccination campaign was suspended altogether in two provinces of Afghanistan – one of the few countries where polio is still endemic despite global efforts to achieve eradication.

“The safety of the healthcare and aid workers in conflict zones must be respected and protected in all circumstances as the violation of health care worker rights is both a health and humanitarian crisis.  Unfortunately, the safety of healthcare workers in conflict zones is one of the most crucial humanitarian issues, but it’s being overlooked”, says Dr. Naveen Thacker, President-Elect, International Paediatric Association.

Women, children and adolescents in conflict and humanitarian crisis settings face additional threats to their lives and wellbeing.  Ten million deaths in children younger than five years between 1995 and 2015 globally can be directly and indirectly attributed to conflict. Women of reproductive age living near high intensity conflicts are three times more likely to die than women in stable settings.

Health and aid workers also risk their own security, and their lives, trying to maintain service coverage, care and support for vulnerable women, children and adolescents in conflict settings. They may become casualties of conflict, either as accidental victims of attacks or as deliberate targets of hostile forces. Violence against aid workers claimed 484 individual victims in 2020, 117 of whom died, making 2020 the worst year on record for the second year in succession.

“Attacks on health systems and personnel in conflict zones not only result in profound acute- and long-term effects to health systems but also put a strain on health care staff with many traumatized directly and vicariously. There is an urgent need to address this grave issue, as it is crucial to the achievement of both SDGs 3 and 16”, says Dr. Jaideep Malhotra, International Federation of Gynaecology and Obstetrics.

In Myanmar during the one year since the country’s coup and the ongoing crackdown 30 health workers were killed, and 286 health workers arrested or detained in a total of 415 attacks on health care workers.  In less than a year since the Taliban takeover of Afghanistan, there has been seven attacks on health care personnel, facilities, supplies and transport resulting in 41 deaths and 50 injuries.

“To protect those who protect us, there is an urgent need for targeted co-ordination of investments to promote safe service access, including delivery of vaccines and other essential services and commodities through multi-level and multi-sectoral private-public efforts,” write Helen Clark and Kirsti Kaljulaid in the BMJ.

The impact of conflict and humanitarian crises on women, children and adolescents and the health care workers who risk their own lives protecting others will be further explored in a forthcoming virtual summit hosted by PMNCH, the world’s largest alliance for women’s, children’s and adolescents’ health.

On Thursday, 19 May, 2022, Lives in the Balance: Delivering on Commitments in humanitarian and fragile settings will bring together representation from governments, the private sector, non-governmental organizations, academic institutions, health professional associations, youth-led organizations, and grass-roots campaign groups to explore what form a global response to these challenges should take.